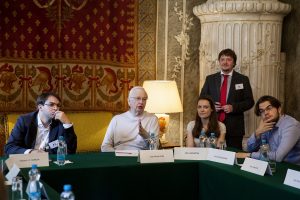 I was invited by the French Institute of Prague to attend and present my works at the “Young Talented Scientists” forum, which was held at the French Embassy of Czech Republic, on the 21st of June 2016, Prague.

A lunch with the French Ambassador in Czech Republic, Jean-Pierre Asvazadouria, and a debate on the mobility of researchers with the Nobel Laureate of Chemistry Jean-Marie Lehn was organized at the French Embassy.

The main outcome was to prepare advises to communicate with both French and Czech governments to improve the scientific mobility programs between the two countries.

Official report and pictures can be found on the website of the French Embassy.